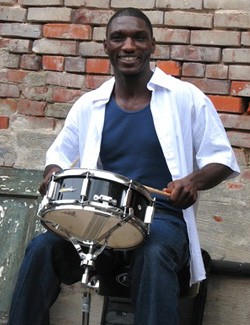 The solid young Mississippi blues drummer Calvin Jackson began recording in the early '80s and by the end of the millennium had come up with his own group and exciting direction, Calvin Jackson & Mississippi Bound and Goin' Down South, respectively.

For this effort on the Beatville Blues imprint, Jackson covered songs by such obvious influences as Mississippi Fred McDowell plus added his original complaints to this whining, fussing genre such as "Hard to Get Along" and "It's Gonna Rain."

Jackson should not be confused with the pianist and arranger of the same name whose clients included Elvis Presley. The latter icon certainly would have approved of Jackson's sounds as described by one reviewer: "The material has a sort of juke joint blues flair to it, for the sound is mostly uptempo numbers that make you want to dance and party." Jackson began drumming at the age of 16 with retro blues wonder R.L. Burnside, particularly the Sound Machine combo. Blues enthusiasts capable of getting more specific than simply naming states claim Jackson cannot be beat in a style of drumming identified as peculiar to the north of Mississippi.

His methods have partially been handed down from one of the oldest styles of percussion in the South, the fife and drum bands. ~ Eugene Chadbourne, Rovi