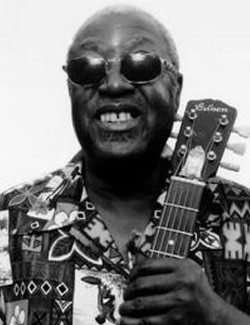 Cootie Stark was called the King of the Piedmont Blues. He learned songs from the originators of Piedmont Blues - Baby Tate, Pink Anderson, Walter Phelps, Peg Leg Sam and Blind Sammy Doolie. Cootie had a repertoire of hundreds of nearly forgotten Old Blues and Gospel songs, making him one of the last direct links to a South long gone.

When Cootie Stark died last year, we lost an important link to our community's musical past. Cootie was born Johnny Miller in 1927, in Abbeville County, SC. His mother told him that he began singing as a baby and played rhythms on cans to pass the time. Born with poor eyesight, he wasn't able to attend school. When he was 14, he schooled himself on his first guitar and began to play on street corners of Abbeville. He lived in Anderson for a short time and around 16 moved to Greenville.

That's where he met Baby Tate. Cootie would follow him and his band around while Tate would teach him songs like 'Little Lean Woman' [Skinny Woman]. He would sometimes play his guitar on Spring Street to make money.