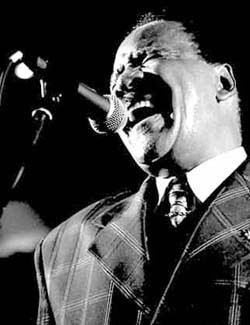 Nashville-born Jimmy Church entered music professionally while he was still in high school as a singer in the R&B vocal group the Seniors, whose ranks also included guitarist Bobby Hebb. They were good enough to be signed by Excello, and he later moved on to the Hi-Fi's, who got a contract with Baton Rouge-based Montel Records. He passed through Johnny Otis' band in Los Angeles but preferred the music opportunities in the South, returning to his native Nashville, where he began his solo recording career on the Hickory label. He later moved to OKeh during the latter's final active years, and to Sound Stage 7 and Peach Tree. He also passed through the lineup of the King Casuals -- whose ranks also included a young Jimi Hendrix -- before forming his own group, the Jimmy Church Revue.

His own career was managed by DJ and record producer William "Hoss" Allen. When the latter was putting together his television soul showcase, The !!!! Beat, in late 1965, it was only logical that a big part of the house band would come from the ranks of Church's revue, including Frank Howard & the Commanders and Johnny Jones, who constituted ready top talent. The Jimmy Church Revue became a top attraction among college audiences in the Southern and border states during the 1970s, and he's remained active right into the 21st century, touring Europe as well as continuing his work in America. One of his OKeh sides, "Hurt," was a minor hit in England, and he is one of those American acts idolized by Northern soul enthusiasts on the far side of the Atlantic.