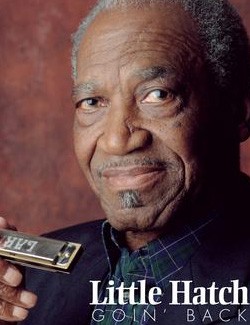 Born Provine Hatch, Jr. in Sledge, Mississippi, he learned to play harmonica from his father. Hearing blues and gospel music, Hatch knew he wanted to make music for a living. At age 14, his family moved to Helena, Arkansas and the blues scene caught his attention.

Hatch joined the Navy in 1943; after his tour of duty, he relocated to Kansas City, Missouri in 1946. After working for a cartage company for two years, he founded his own cartage business and married.

In the early 1950s, Hatch began jamming in blues clubs of Kansas City. He closed his business in 1954 and took a job with Hallmark Cards. In 1955, he formed and fronted his own band, playing on the weekends and a few nights a week. This act would continue for more than 20 years. By the late 1950s, Hatch's harmonica style became influenced by Chicago blues players such as Little Walter, Snooky Pryor and Junior Wells.

In 1971 German exchange university students recorded a Little Hatch performance. This became an album, entitled The Little Hatchet Band, but distribution was limited to Germany and Belgium. He retired from Hallmark in 1986 and his band, "Little Hatch and the House Rockers", were hired as the house band of the Grand Emporium Saloon in Kansas City. A cassette of his blues performances at the Grand Emporium was released in 1988.

In 1992, the Modern Blues label released Well, All Right and became his first nationally-distributed album. In 1997, Chad Kassem opened Blue Heaven Studios and founded the APO label. Kassem had befriended Little Hatch in the mid 1980s and asked him to be his first signed recording artist. In 1998, the album Goin' Back was released and was followed by Rock with Me Baby in 2000.

From 1999 to 2001, Hatch occasionally toured other parts of the United States, and twice toured Europe. He settled back down as a Kansas City performer, frequently playing at BB's Lawnside Bar-B-Q and other venues. In the summer of 2002 Hatch was diagnosed with cancer. He died in January 2003.