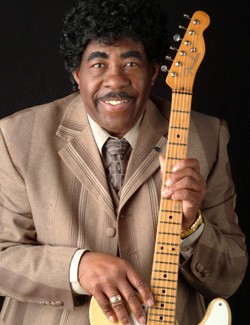 He was the younger brother of Buddy Guy.

Born in Lettsworth, Louisiana, Guy played with the harmonica player Raful Neal for ten years in the Baton Rouge, Louisiana area before relocating to Chicago in 1969 where he joined his brothers' band. He played in Buddy's band at the time his older brother was starting to become known to more and more people as one of the true innovators in blues guitar. They also collaborated extensively with Junior Wells in the 1970s, and Phil recorded a number of albums under his own name in the 1980s and 1990s, branching out into soul and funk.

Phil can be seen in his self-described "hippie" phase in the film Festival Express in which the Guy band tours through southern Canada by train in 1970 with The Grateful Dead, Janis Joplin, The Band, and others.

Guy died of prostate cancer in August 2008 in Chicago Heights, Illinois, just a few months after being diagnosed.