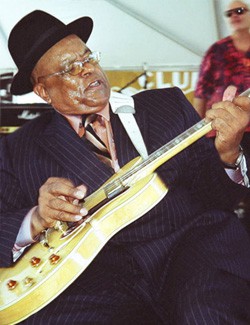 His family moved to Houston when he was six. He is the brother of Grady Gaines, once saxophone player in Little Richard's backup band The Upsetters. At an early age Gaines first began playing piano in the style of Nat King Cole. He became friendly with other local musicians such as Clarence Hollimon and Johnny Copeland. In his teens he switched to the guitar and became an admirer of T-Bone Walker, another Texan.

Roy soon began playing clubs throughout the Houston area. He met his hero in 1951, and even backed T-Bone on stage when he was fourteen. By the 1950's Gaines had moved to Los Angeles. There he joined Roy Milton's band. He was only sixteen and learning quickly. Soon he took his new skills back to Houston. This period saw Gaines sitting in on many recording sessions with the legendary Peacock Studios He made his solo debut with an obscure release on Chart Records out of Miami. But it was when he came to the attention of Bill Harvey that his career stated to take off. Harvey was the leader of Duke and Peacock Record's house band. With that band Gaines was featured on various releases by Big Mama Thorton, Jr. Parker ("Driving Me Mad") and Bobby "Blue" Bland ("It's My Life Baby" & "Woke Up Screaming") in 1955. Other early sessions included "Essential Jimmy Rushing" in 1954. And 1957's "Blues Wail: Coleman Hawkins Plays the Blues". He also worked with the Jazz Crudaders (later known simply as the Crusaders) appearing on two LPs in 1961. In 1966 Gaines returned to Los Angeles and joined the Ray Charles big band. While with the band he wrote "No Use Cryin'" for Ray's hit album "Crying Time". Another R&B artist became impressed with the guitarist, and Roy began working with Chuck Willis (King of the Stroll).

He moved to New York City and recorded with Willis for Atlantic Records. During this time he signed, under his own name, with RCA Victor's Groove subsidiary label. With Groove Gaines released two albums in 1956. Then came a chaotic period when he was going from label to label. In 1957 it was Deluxe Records. Back to RCA in 1958. And the sixties saw only two releases on the small Del-Fi and Uni labels. Chuck Willis died in 1958 and Roy continued his session work. By the seventies Gaines was again in demand, making many public appearances either solo or with the Crusaders (1978). He continued as session musician working with artists like Aretha Franlin, Della Reese, the Supremes. He was featured on Stevie Wonder's landmark album album "My Cherie Amour", Milt Buckner's "Green Onions" (1975) and Albert King's "Albert" (1976). He also continued to work with T-Bone Walker until Walker's death in 1975. Roy was part of Harry Belafonte's Las Vegas show in 1976. He toured Central and South America with the Supremes in 1976, and the U.S. with Diana Ross in 1977. When Gaines returned to L.A. he was once more in constant demand. This included movie and television work with Quincy Jones. Roy wrote "Don't Make Me No Never Mind" for the movie "The Color Purple" (1985), played on the session, and had a cameo role in the film itself. But it wasn't until 1981 that he recorded solo again. Gaines signed with Red Lightin' Record and, in 1982, released "Gainelining" a very fine and critically acclaimed album.