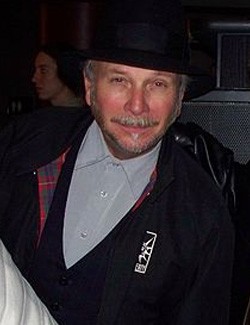 Roy Rogers (born July 28, 1950, Redding, California) is an American slide guitarist and record producer. He was named after the singing cowboy, Roy Rogers.

Rogers plays a variety of guitar styles related to the Delta blues, but is most often recognized for his virtuoso slide work. In the 1980s Rogers was a member of John Lee Hooker's Coast to Coast Band. Rogers produced four John Lee Hooker recordings; ' The Healer' ; Mr. Lucky; Boom Boom and "Chill Out." He also produced two Grammy nominated recordings for Ramblin' Jack Elliott entitled "Friends of Mine" and "A Long Ride." Roy also co-wrote "Gnawnin' On It" which was nominated for 'Best Female Rock Vocal for Bonnie Raitt, a long time friend and collaborator.

Rogers has performed and/or recorded with for a diverse spectrum of artists including Linda Ronstadt, Sammy Hagar, Bonnie Raitt, Zucchero, John Gorka and Ramblin' Jack Elliott, and Elvin Bishop, Carlos Santana, and Steve Miller. Since 1980, Rogers has also fronted his own trio, The Delta Rhythm Kings.[1] In 2003, Roger's own Slideways reached number 3 on Billboard's 'Split Decision' also charted in 2009. chart for "Top Blues Albums." He has also been nominated for 'Best Blues Guitar Instrumentalist" by The Blues Foundation. Other awards include those from France and Austrilia with long time friend Norton Buffalo.

His current release in May 2011 is a collaboration with The Doors co-founder Ray Manzarek entitled 'Translucent Blues' which will be released by Blind Pig Records in May 2011. His releases have been received worldwide, as he has been touring Europe, Brazil, Australia, Scandinavia since 1982.