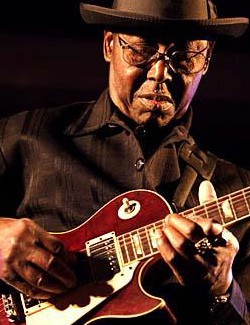 Texas Johnny Brown is truly one of the legendary figures of the American blues scene. Johnny began his professional musical career in Houston in the mid- 1940s with Amos Milburn's "Aladdin Chickenshackers". Johnny played guitar on many of Milburn's recordings on Aladdin Records, and Milburn and other members of his band backed Johnny during his Atlantic Records recording session in 1949. Johnny also appeared on Ruth Brown's first Atlantic Records recordings, which were cut during those sessions.

Three of Johnny's original songs from his Atlantic session, There Goes the Blues, Bongo Boogie and Blues Rock, were included on an Atlantic compilation of blues guitarists in 1986. Johnny recut There Goes the Blues for his debut full-length CD, Nothin' But the Truth, which was released in 1998 by Choctaw Creek Records.

Johnny toured with Bobby "Blue" Bland and Junior Parker in the 1950s and 1960s as guitarist and bandleader and was a studio musician for Houston's Duke/Peacock Records. He recorded a number of his own compositions for Duke/Peacock, including Snakehips and Suspense, and his distinctive guitar style graced the recordings of numerous other Duke/Peacock blues artists, including Bland, Parker and Joe Hinton. Johnny also wrote the beautiful blues classic, Two Steps from the Blues, which was one of Bland's biggest hits. Nothin' But the Truth marks the first time that Johnny recorded Two Steps from the Blues himself. Nothin' But the Truth also contains nine new original compositions by Johnny and an instrumental version of Aretha Franklin's Am 't No Way.